In an unsettling update to the recent harness-wearing whale news story in which a harnessed whale believed escaped from the Russian military was found wearing a harness that could be weaponized, it was revealed that President Trump wears a similar harness. The evidence — a series of shirtless photographs of the president showing a similar harness to the whale — was leaked from government e-mails by a mysterious hacker known as Stiffbrim and released to news media. The attendant furor and disruption in the White House effectively shut down the government for 12 hours while they struggled to formulate a response.

Sarah Huckabee Sanders, White House Press Secretary, appeared baffled at a news briefing. She was observed opening and closing her mouth several times speechlessly, “exactly as a whale might do,” according to an unidentified reporter from The Washington Post.

Indeed, the harness-wearing whale was not shy about approaching humans, opening its mouth apparently expecting fish, a telltale sign of previous training. Exactly what kind of training, no one is certain, but fingers are already pointing to Russia’s President Vladimir Putin, who, like our president, leads military strategy. 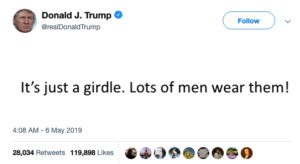 “We know that in Russia they have had domestic whales in captivity and also that some of these have apparently been released,” said Audun Rikardsen, professor at the department of arctic and marine biology at the Arctic University of Norway (UiT).  “I contacted Russian researchers who said the harnessed whale had nothing to do with them. They tell me that most likely it escaped from the Russian navy in Murmansk,” Rikardsen said. The Murmansk Sea Biology Research Institute in northern Russia conducts research and training on behalf of the navy to see if beluga whales could be used to guard entrances to naval bases in arctic regions as well as to assist deep water divers and if necessary kill any strangers who enter their territory.

Interestingly, there is precedent to a spontaneous personal revelation by a U.S. sitting president. In September 1965 President Lyndon Johnson showed his gallbladder surgery scar to the press. Johnson’s reputation was damaged by the unprompted moment, with many people branding him a “country bumpkin.”

Despite the raging cold war at the time, there was no evidence the scar was controlled by the Kremlin.

Allegations of Control by Putin

While not a direct threat to the presidential office, the FBI immediately took a sample of the harness for analysis. (The president refused to hand over the entire apparatus.) Their findings were announced in an unusually candid moment. “Sophisticated electronics, some of it unrecognizable by experts,” said FBI’s Agent Kolstein who described the harness as nanotech-embedded leather — an array of impossibly small, complex, connected computers. “The good news,” he concluded, “is we tapped into the nano-network and found encrypted messages dating back three years. We’re working on decoding them. When we do, you’ll be the first to know.”

Agent Kolstein acknowledged the existence of friction between the President and the FBI. “Rest assured, if legal infractions are found they will be vigorously pursued according to the strictest application of the law,” he said.

Naturally the Democrats are beside themselves with glee and anticipation. Speculation about the purpose of the harnesses and their obvious connection (note the hammer-and-sickle symbols on the harness clips in the above photo). A number of op-ed pieces sprung up claiming the whale was part of a secretive underwater special-ops unit. While it was true the harness had dual GoPro mounts that could easily house weapons, the assertion that they were attack animals could not be corroborated.

The use of animals for military purposes isn’t new. During World War I the British army tried to train seagulls to defecate on the periscopes of German U-boat, blinding submarine crews. Since 1959, the U.S. Navy Marine Mammal Program has trained bottlenose dolphins and California sea lions to detect, locate, mark and recover objects in harbors, coastal areas, and deep sea.

During their research the Murmansk sea biology research institute concluded dolphins and seals were much more suited to the training and arctic climates than the Beluga whales. The whales were deemed too sensitive to the cold and did not have the same “high professionalism” of seals, which had a far better memory for remembering oral commands. They were dropped from the program.

Some have said — in defense of the president — that he, too, must no longer be a part of the program because he was deemed too sensitive to criticism and did not have the same “high professionalism” or reliable memory of other assets in the field. Despite this, a vocal minority maintain the president became president with Putin’s help via the harness interface.

Some of the locals joked that the whale had defected to Norway because it is refusing to stray more than a few miles from the northern harbor where it was discovered. Those opposed to Trump point to his focus on the next election as evidence he is under Vladimir Putin’s control: he, too — like the whale — must stay put, despite oft-expressed desire to return to the business world.

There is ample evidence that Trump’s presidential win was a direct result of a two-pronged Russian attack: the first was Russian hackers spreading disinformation on social media, and the second was Putin’s alleged puppet-mastering of Trump, who issued confusing and conflicting statements that followed no known logic yet tapped into a previously unknown constituency. The goal was to divide American society and foster anti-Americanism, which, Trump detractors claim, has been achieved. It was a political win for Putin and a marketing win for Trump.

Speculation intensified when Director of National Intelligence Dan Coats said Russian hackers used “nanobot armies to promote partisan causes on social media.” Nanotechnology is at an impossibly small scale, with one nanometer equivalent to one billionth of a meter (0.000000001 m), or, if you’re so inclined, ‎1×10−9 m. Some believe the Russians are light years ahead of the Americans when it comes to nanotechnology, especially military applications.

Predictably, the Russians deny any manipulation. An officer quoted by the media mocked the idea, arguing that the military would not be stupid enough to “leave their phone number” on an animal trained for clandestine activities.

Marine biologist Jorgen Ree Wiig told CNN: “The whale seemed playful but our instincts said that it was also asking for help to get out of the harness.” The Norwegian Directorate of Fisheries succeeded in freeing it from the harness, after which it swam away. “It was the best feeling ever,” Wiig said.

“Maybe if we free Trump from his harness he won’t run in 2020,” U.S. Representative and presidential candidate Bernie Sanders said. “We can always dream.”

God Shuts Down Heaven for Business