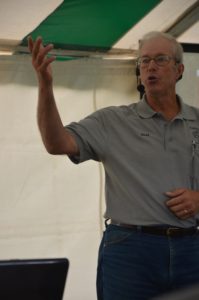 He clucked like a chicken, ranted like an activist, twanged like a Southerner. Joel Salatin delivered a one-day master class on August 4 in Dunham, Quebec, for “beginner farmers, wanna-be farmers, landholders, and clean-food advocates who are ready to get serious about regenerative agriculture and fair food systems built from the ground up.”

Folksy, intelligent, articulate, animated, creative, funny, deeply insightful, and sharply critical of what isn’t working in industrial agriculture, Salatin delivered a succession of messages from practical farming tips to Eastern philosophy, civil disobedience, loving gratitude for family and friends, a profound respect for nature and its harmonies, and strategies for making money, all while exuding a warmth you’d expect from your best friend.

The event was held under a tent at a farm in Southern Quebec. Nearly 200 people attended; most were French-Canadian and from every demographic imaginable. An apple orchard bloomed on one side, and fat, healthy pigs lolled in the mud on the other. It was alternately sunny and rainy, a moody day, which didn’t affect the enthusiasm of the crowd.

Salatin, 58, grew up in the Shenandoah Valley, on a 650-acre farm he calls Polyface (“The Farm of Many Faces”). He provided detailed examples of how he raises chickens, rabbits, and cows most productively and beneficially for all. He offered advice on grassland and water management and answered numerous audience questions.

“A good model should be scale-independent, scale-neutral,”Salatin said. Harness the power of rooting pigs, for example, and you aerate the soil (he calls them “Pigerators”). Respect the pig by obeying its natural tendencies.“Pigs don’t need their oil changed. They don’t join a union. They’re fellow laborers. When you’re done with them, you eat them.”

While scalability is critical, it must also be viable in both a developed and an undeveloped country. “That is a powerful benchmark of truth if you want to produce credible alternatives to the industrial food system.”

Multi-Use Equipment and the Imagination

Salatin said, “Single-use capital-intensive infrastructure is today’s paradigm. It’s purchased to free us, but actually it enslaves us by making us totally dependent.”

The solution, he suggests, is multiple-use equipment. Salatin emphasized the importance of applying multiple scales and multiple income-streams to create a symbiosis that benefits all. The financing and maintenance of a farm’s infrastructure is a burden to the next generation, he said, which “encourages young people to leave farms because they don’t want to inherit the responsibility.”

As Salatin pointed out, “Eastern philosophy emphasizes community, where the whole is worth the sum of the parts. Western philosophy is about ‘me’and lacks the framework to bound our creativity.”Salatin suggests that we blend the two at the intersection of riparian, forestal, and open environments to promote greater diversity of flora and fauna. Good farming, he says, will increase wildlife.

The goal of The Farm of Many Faces is to provide a breeding ground for the next generation of farmers. In addition to running apprentice and internship programs, Polyface encourages and guides new farmers with incubator-lease farms, similar to Vermont’s Intervale.

“What we need are low-capital, entry-level solutions,”Salatin said. “We don’t generate job descriptions; rather, we offer opportunity for individuals to create their own fiefdom and their own salary.”

Judging by Salatin’s financial success —which includes many books he’s authored, as well as media and public appearances —he must be doing something right: Polyface is a $3 million business, which services 50 restaurants and has a 6,000-member metropolitan buying club.

His final advice? “Engage in visceral participation with our ecological womb. And quit trying to do everything perfectly.If it’s worth doing, it’s worth doing poorly first.”

The Future of Food: 10 of the Best Restaurant Startups and Innovators

How to Form Effective Farm-to-Table Partnerships