On September 21, 2014, I joined a sustainable agriculture contingent at The People’s Climate March in New York City, which laid claim to the largest climate march in history with over 400,000 people marching. All told, the climate march had 2,646 solidarity events in 162 countries. Media coverage was generous, which amplified the message:  “To Change Everything, We Need Everyone.” And the word got out to the world.  Climate change awareness is on the rise. 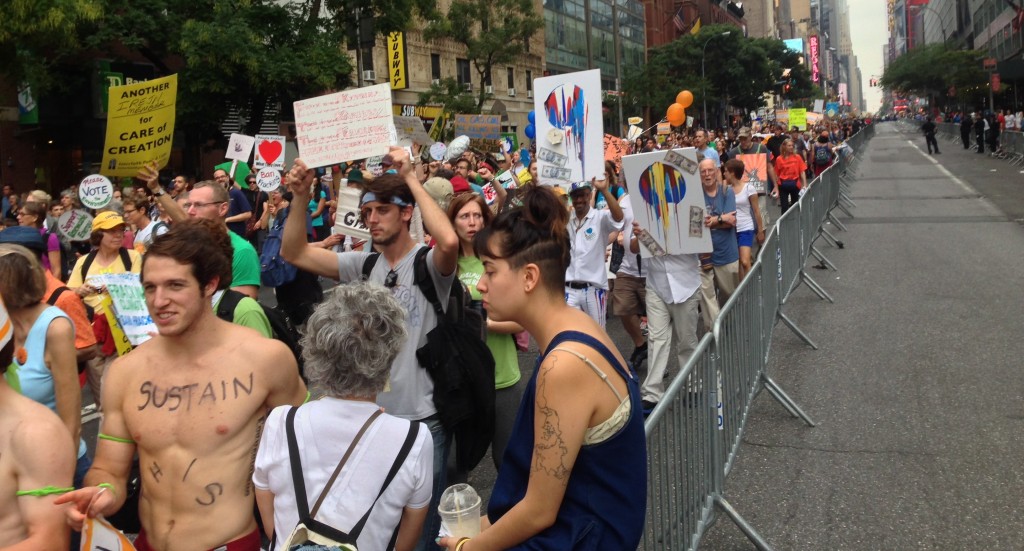 Before driving six hundred miles to march two miles, I weighed the carbon footprint of travelling the distance against the value of getting the message out about climate change. I decided it was worth it. Silence is not an option. What kind of baton, I wondered, will we pass to the next generation? The march was an opportunity to connect with others who saw the same opportunity—to turn things around by vox populi.  Here is where the idea of the march shines:  the support of activists, politicians, and educators help magnify and impress the urgency of the message. In fact, many of these public figures came to the march to lend their voices to the message. 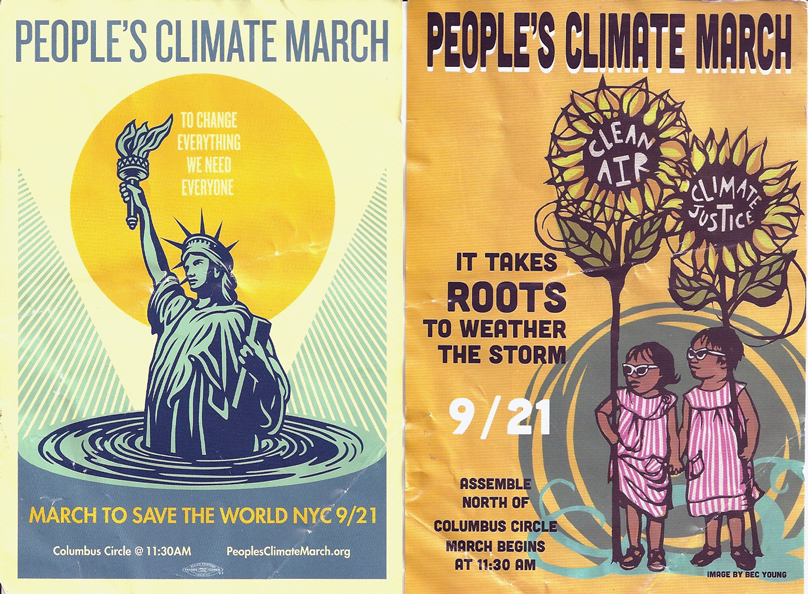 Vandana Shiva was one such person. Shiva is executive director of Navdanya, which promotes biodiversity, conservation, organic farming, farmers’ rights, and seed saving in India. She is the author of many books, including Making Peace with the Earth and Soil Not Oil:  Environmental Justice in an Age of Climate Crisis.

Shiva attended the UN Climate Summit—the event which birthed the timing of the march—to highlight the connections between climate change, politics, and our food system: “This is a paradigm shift,” she said. “Historically, social movements need to have a coming out, an awakening moment and this is it for the climate movement… Climate change is an externality of not just a fossil fuel industry but a corporate-driven industry which has dismantled people’s rights, democratic rights, and the cultures that have protected our ecosystems… Today’s the day we turn the tide.” 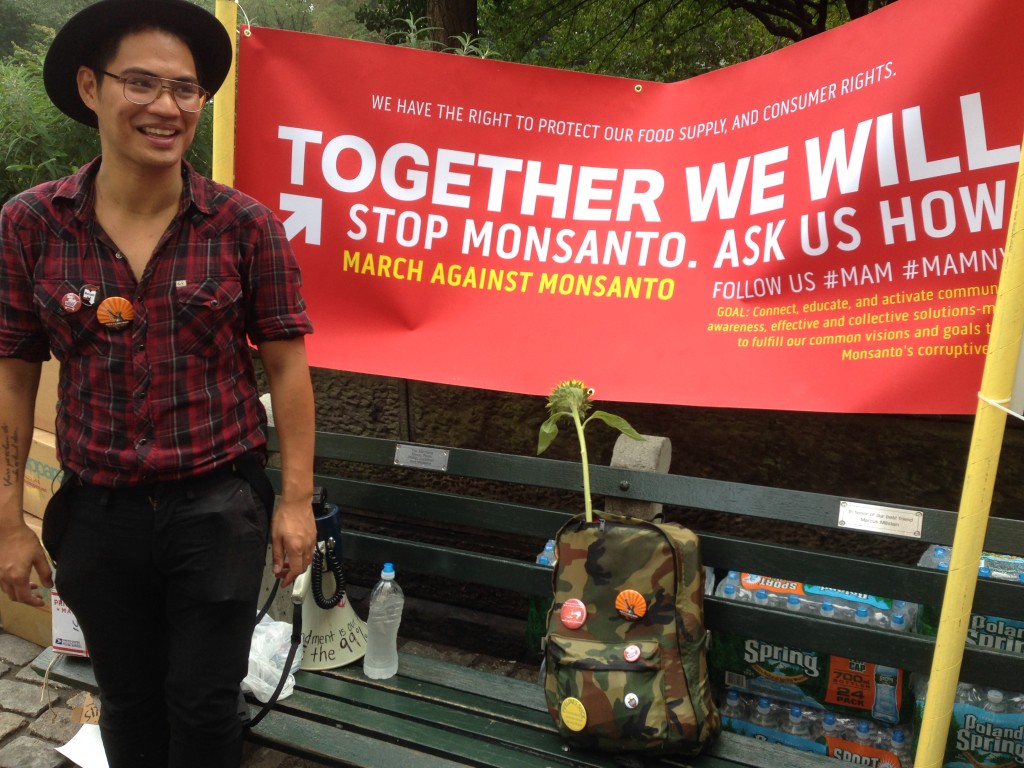 The morning of September 21, I made my way to Columbus Circle, the gathering point for the start of the march. Even while on the train, people of every age held signs, either flat-mounted on a stick or rolled up neatly in hand. Some were dressed with elaborate makeup and flashy clothing. Others looked downhome and country. Many accents could be heard. We asked each other where we were from (Seattle, Kentucky, Germany, Israel). Common cause had—at least for a time—allowed us to talk not just freely but warmly to strangers on a train.

Exiting the subway into Columbus Circle, the anticipation erupted into full-blown electricity.  Wave after wave of people intermingled in humid 70 degree weather.  They flowed like a river, chatting, laughing, pointing, cheering, and occasionally bursting into song or chant. 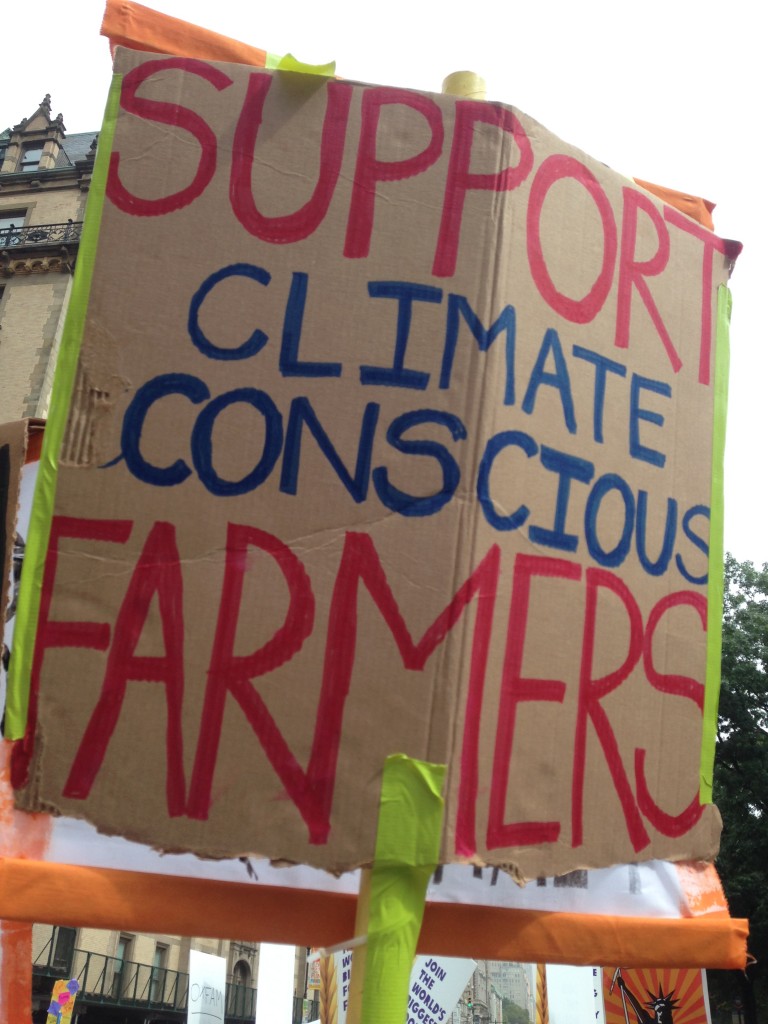 Energized, buzzing with political messages, we wanted to be loud and we wanted to be heard. The sun shone on us as we began to march from 72nd Street and Columbus on the green perimeter of Central Park.

Bill McKibben is the man behind this march. A familiar articulate voice for environmental justice in Vermont, he founded 350.org, the first global grassroots climate change movement, and wrote The End of Nature, a highly regarded early book on climate change. McKibben purposely placed Indigenous People and front-line communities at the head of the march. “Climate change is the most unfair thing that’s ever happened. The people that produce the least carbon get screwed first. Their voices need to be heard loudest. That’s why they’re up front,” he said.

Bernie Sanders was there, too. Shadowed (but not eclipsed) by a potential presidential run, he spoke to a reporter from Democracy Now.  “One of the reasons that we have virtually no Republican in Congress who even acknowledges the reality of climate change is because of all the money in politics. So, we are not going to change politics in America unless we deal with the Koch brothers and the other billionaires who are now trying to buy elections. Furthermore, if we live in a society which is based on simply purchasing, purchasing, purchasing, consumerism, consumerism, consumerism, more and more development, without understanding sustainability, we’ll have long-term problems.” 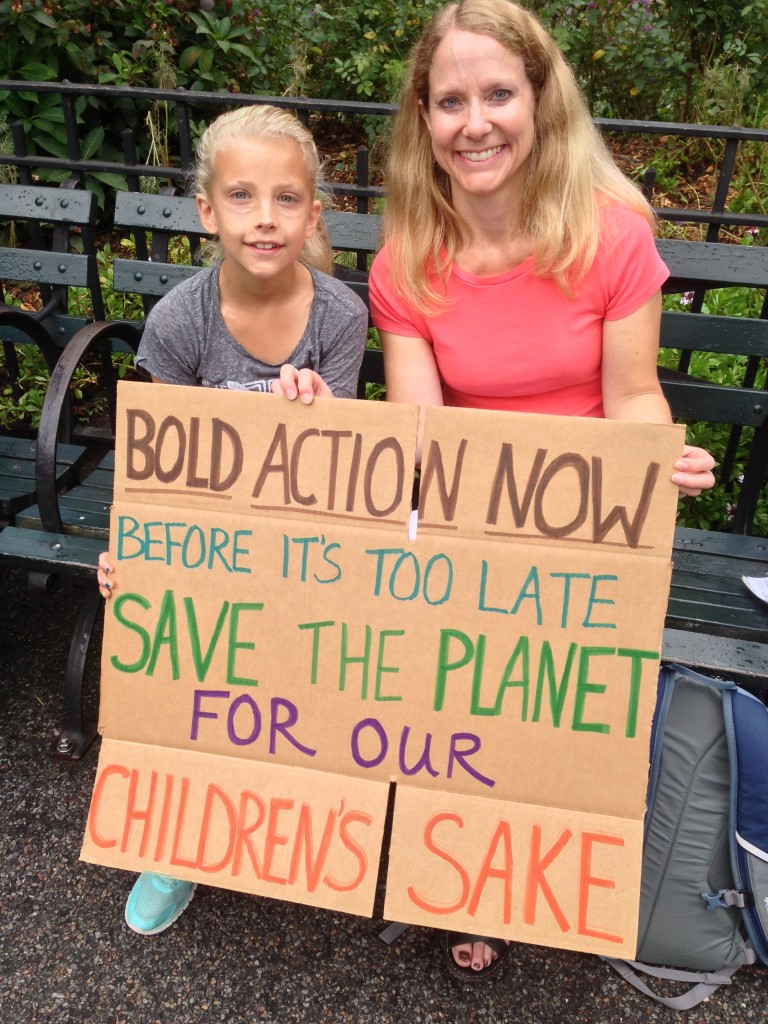 The march lasted four hours as group after group made its way along the route. Despite the seriousness of the issues, there was a pervasive feeling of hope, good humor, and tolerant patience as we stopped from time to time for no visible reason. After watching all the post-media coverage, I realize I only got to see a microcosm of the river of almost half a million people. The range of humanity was staggering in its diversity but united in its message: there is an urgent need for systemic change.

It’s not altogether unrealistic to consider we all might be eating Toasty Grasshopper Cereal for breakfast when climate change picks up momentum. That will be the least of our hardships, as climate change—which has already begun—wreaks drought, heat waves, flooding, disease, and threatens our food supply.